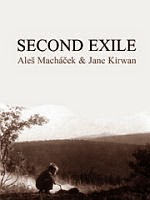 Aleš Macháček was born in Prague and after university worked as an engineer. In 1977 he was sentenced to three years in prison for helping distribute books and periodicals banned by the regime in Czechoslovakia, in 1985 he was bullied into exile in London as part of a secret police campaign to get rid of troublesome dissidents. He was given a Gratias Agit in recognition of his activities in 2001 by the Czech foreign ministry and first published in a collection of texts by political prisoners in 2002 Bytem v Hruze.

Jane Kirwan’s poems have appeared in magazines and anthologies, and her poetry collections Stealing the Eiffel Tower (1997), The Man Who Sold Mirrors (2003) and Second Exile (poems with prose by Ales Machacek (2010) were published by Rockingham. Born in the NHS, co-authored with Wendy French, came out from Hippocrates Press in 2013. She won an Arts Council Writers’ Award in 2002, has been commended and given prizes in many competitions and read at poetry festivals in the UK and abroad.
The two met in London in 1989 and Second Exile was put together when Ales decided to give his version of those of Jane’s poems that had started from his stories.