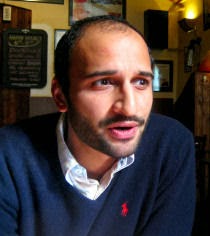 This month, we were delighted to welcome Shaan Joshi, a resident of Prague and editor-in-chief of The Prague Revue. A graduate of Indiana University, Shaan formerly served as education coordinator for Ecole Shalom school in Haiti before coming to the Czech Republic. In 2012 he helped to re-launch The Prague Revue, a literary journal originally founded in 1995 but dormant since 2008. The huge success of the online version of the Revue, with its associated stream of bold, contentious and often provocative writing, led to a decision to return to print in 2014.  Shaan read from his own work in progress as well as two pieces previously printed in the TPR stream.