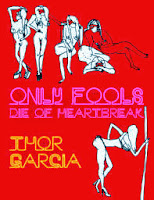 What They're Saying About Thor Garcia:

"Thor Garcia . . . brings to mind the best bits of John Kennedy Toole’s A Confederacy of Dunces; the novels and short stories of Charles Bukowski; Bret Easton Ellis’ American Psycho and the gonzo journalism of Hunter S. Thompson, all made to feel at home within the unique, effortless likeability of Garcia’s own literary persona. . . . Highly recommended."

“[Garcia's] panoramas may mesh together, the paranoias and detachments of the various characters may echo each other, but the overall result is a seductive, disturbing vision of life and one way of relating to it, as spectator to spectacle, as victim to one’s own agency, actions and inactions.”

“Presents fascinating ideas about society and the media.”

“Thor sets out to drink himself to death, a true booze-head living in a worm-infested apartment in the heart of a ghetto, alienating most of the women he encounters if given enough time, spurning the rest, often beaten up and otherwise brutalized while somehow carrying more than his load. . . . Sicker than what Celine presents, for certain, but then the world is sicker now than in Celine’s day by any rational measure.

“It's hard to imagine writing that is more energetic.”