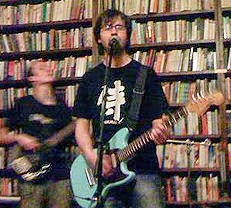 After nineteen years in Illinois and thirteen in southern California, Carrie Etter moved to England in 2001, where since 2004 she has been a lecturer in creative writing at Bath Spa University.

Her poems appear in such journals as The Iowa Review, The New Republic, Poetry Review, and The Times Literary Supplement, and in June Seren Books published her first collection, The Tethers, which Glyn Maxwell describes as "sorrowing, glad, graceful...a rich and significant debut."

Holly Tavel is a writer and artist whose fiction has appeared in, or is forthcoming from, Torpedo, Elimae, McSweeney's, and Diagram, which awarded her its Innovative Fiction Award in 2007. She holds an MFA in Literary Arts from Brown University. For several years, as a member of Glowlab, a Brooklyn-based artist's collective, she collaborated on projects involving public-space performance, social sculpture, and experimental walks, was editor of Glowlab's Neuroscape Journal, and helped curate the Psy.Geo.Conflux, an annual New York-based event bringing together artists, lecturers, and the public for several days of projects exploring urban space and the city.

Her visual/conceptual art has featured in group shows at the Participant Gallery in New York, and at Art Interactive in Cambridge, MA. In 2005 she developed a Psychogeography course at Brown, which she is teaching for the third time this summer. In addition to working on a novel, she is in the process of collaborating on a book focused around writers' responses to found photographs. She lives in Brooklyn, and teaches in the English Department at CUNY-Borough of Manhattan Community College. If we're lucky she will play us some ukulele.

Back in 2000, Sophie Cooke's short story 'Why You Should Not Put Your Hand Through The Ice' won runner-up prize in the MacAllan/Scotland on Sunday Short Story Competition, which was then the biggest short story award in Europe. Since then, she has written many more short stories. 'Skin and Bones' was commissioned by BBC Radio 4 and read by the actress Laura Fraser; other stories have been published in anthologies; and Cooke recently performed her newest work at the Kikinda Short Story Festival in Serbia.

She has also written two novels, 'The Glass House' and 'Under The Mountain', both of which have received extremely good reviews. After the publication of 'Under The Mountain' - a playful novel which examines responses to violence and the shifting currency of truth - Aesthetica magazine described Cooke as 'an important voice for this age'. Critics compare her work to that of Virginia Woolf and of contemporary screenwriters such as Thomas Vinterberg. Originally from Scotland, Cooke currently lives in Berlin.

Peter Le Couteur was born (with one eye closed) in London in 1982, four days before Musical Youth's 'Pass the Dutchie' replaced 'Eye Of the Tiger' as Number 1 in the UK Singles Chart. He grew up singing very high in choirs and listening to Leonard Cohen, Annie Lennox, Clannad and 30s jazz with his parents.

After studying Literature in Durham and Art in Bristol, Peter moved to Prague in October 2008 to work on his portfolio for an MA in Sculpture. He started writing songs about four years ago but played his first solo gig at the Globe this February (the recording is on www.myspace.com/peterlecouteur).

Peter is currently working on an EP of songs based on myths, but so far has only finished the song about Actaeon.

Richard C. Pizey was born in London and when only a few months old was almost lost at sea, while crossing the Bay of Biscay en route to India.

Educated at Pangbourne College, Richard went on to encounter a variety of jobs in a variety of countries, eventually taking up a career as a recording engineer. Thirty years in the studio profession saw him writing scripts and jingles for radio and television commercials, and a handful of yet-to-be-discovered songs.

Richard travels extensively and has lived in many countries, including Denmark, Germany, Spain and Australia.

He is currently working on the sequel to Ripples, as well as a third novel, which explores life in the mountains of Andalusia as viewed through the eyes of José, a septuagenarian who has seen it all.


His chapbook At the Emptying of Dustbins recently appeared from Oystercatcher Press; two e-chapbooks, Across the Water and Swamp Area are available from Mimesis and Intercapillary Space. His translation of Pushkin's The Bronze Horseman is online at Horizon Review. He lives in the Berlin district of Wedding, which has been about to become the next big thing in Berlin for the last 10 years.

"Alistair Noon's writing is characterised by a worldly intelligence, striking verbal dexterity and a technical accomplishment by no means common in today's poetry world. He is a writer to keep an eye on over the next few years." Peter Hughes

Lyric mezzo-soprano Gail Whitmore has been performing classical music either on her own or with various musical groups for over fifteen years.

Educated at the F.H. LaGuardia High School of Music & Art and Performing Arts, the Mannes College of Music Prep and Extension Divisions, the Juilliard School Evening Division and the University of Michigan, Gail began performing with the All-City High School Chorus which introduced the fifteen-year-old to places like Carnegie Hall, Avery Fisher Hall and Alice Tully Hall.

She also sang with the New York Grand Opera Company for seven years at Lincoln Center, Carnegie Hall and Central Park SummerStage performing every opera ever written by Verdi in chronological order, placing the series in the Guiness Book of World Records.

Her solo work has consisted of a concert series at Memorial Sloan-Kettering Cancer Center, concerts for the Wagner Discussion Group of New York, Palazzo Te and the Soroptimist Society, both in Mantua, Italy and benefit concerts for the Association of Dominican Classical Artists, Inc. and Prague Flood Relief 2002.

Gail has performed the roles of Alisa in Lucia di Lammermoor with the Manhattan Lyric Opera, Dido in Dido and Aeneas with Cultice Summer Opera, Maestra delle Novizie in Suor Angelica for Intermezzo Opera and Marcellina in Le Nozze di Figaro for Opera Viva. She made appearances on WABC radio on The James and Joel Show and The Sean Hannity Show, was a finalist in the Classical Productions Junior Level Competition and won an Honorable Mention in the 2nd International Yrjö Kilpinen Art Song Competition.

Since moving to the Czech Republic five years ago she has generated acclaim both as a performer and as a moderator. Beginning as the co-host 3E Expres Evenings in English on Expres Radio she went on to host the 2004 Prague Writers’ Festival, interviewing many distinguished poets and authors. She also performs as a voiceover artist in commercials and ad campaigns for companies such as T-Mobile and Budvar.

Gail also hosts various tourist and corporate performances where she leads the show in English, Italian, Spanish, German and Czech and is frequently interrupted mid-show to be confronted with such statements as "Where's the terlet?" and "Why don't you speak Turkish?"

Performances since then include a classical concert in the 2004 Mladá Praha Festival and performing with the Dave Murphy Band for Chuck Berry’s Prague tour.

This, her Human Jukebox show, where she sings unaccompanied and from memory any song requested from a list of 1,000, premiered Off Off Broadway in New York in January of 2006. She was on pause for the remainder of the year to give birth to her son Atreyu.

David E. Oprava is an expat Czech-American who writes, because he has to. He is terrified of what will happen otherwise. It makes him prolific. He has been in over thirty journals online and in print and his first full-length book of poems, VS., was released in October 2008 by Erbacce Press. His poems have been described as, "spectacularly abundant with wit, insight, music, and, above all, reality.

His book is a great pleasure to read, and may even help you to live." When he isn't writing he is battling against his raging sobriety and trying to live up to the high moral expectations of husbandhood, fatherhood, and humanhood. Not necessarily in that order and not necessarily succeeding. He lives in the UK.

His second collection, LOVE SONGS FOR THE SHY AND CYNICAL, is to be published in early 2009. Christmas 2008 sees the publication of the Doctor Who novel he has co-written for BBC Books, called THE STORY OF MARTHA.

He's written over twenty plays for the stage, and won many awards for them, including the World Drama Trust Award, the Sunday Times Playwriting Award, the Sophie Winter Memorial Trust Award, and the Guinness Award for Theatre Ingenuity in association with the Royal National Theatre. Most recently, he directed a revival of his play 'Shaw Cornered' as international representative at the Old World Theatre Festival in Delhi.

A few years ago he was lured to the world of radio and television; he's written many plays for BBC Radio 4, usually produced by Martin Jarvis, and his most notable TV credit was as writer for the first series of the revived 'Doctor Who' - the season as a whole won a BAFTA, and his episode was nominated for a Hugo Award. Earlier this year his short story project for BBC7, 'The Chain Gang', won him a Sony Award.

Adam Marek’s short stories have been published in Prospect magazine and in anthologies including Parenthesis and The new uncanny from Comma Press, two Bridport Prize anthologies and New Writing 15.

His collection of short stories Instruction manual for swallowing was published by Comma Press in 2007, and was described in The Guardian as a 'transgressive thrill to read' and The Independent as showing a 'genuine unsettling talent'. It was longlisted for the Frank O’Connor prize – the biggest prize in the world for a collection of short stories.

He has read at many events, including the Manchester Literature Festival, the London short story festival, Lancaster Litfest and the Frank O’Connor festival in Cork, Ireland. Right now, he is working on his first novel.

In this debut collection, the English short story receives an injection of something new and compelling and spooky. Alex Linklater