Sharp-tongued, high energy, social surrealist rebel poet and songwriter. His themes are topical, his words hard-hitting, his politics unashamedly radical, but Attila will make you roar with laughter as well as seethe with anger...

Inspired by the spirit and 'Do It Yourself' ethos of punk rock, and above all by The Clash and their overtly radical, political stance, Attila started performing in 1980, blagging spots for his poems and songs in between bands at punk gigs. He quickly got a couple of John Peel radio sessions, a deal with London independent record label Cherry Red Records and before very long was on the front cover of Melody Maker...and he hasn't looked back since! 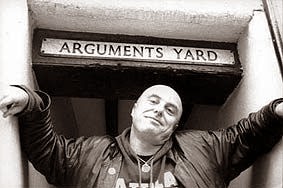 He's released 14 music/poetry albums in 5 countries and 4 books of poems. He's written for many national and local publications including The Guardian, Time Out, NME, Sounds Magazine and The Independent.

In 1994 Attila formed his first-ever band, BARNSTORMER, combining his two great musical loves - medieval music and punk! - and giving him the chance to use his classical violin training and play loads of his favourite medieval instruments. The band released their debut album, 'The Siege of Shoreham' in 1996. The latest Barnstormer album, 'Just One Life', was released in October 2000. 'Live in Belfast', his latest CD of poems and songs, was released in March 2003. 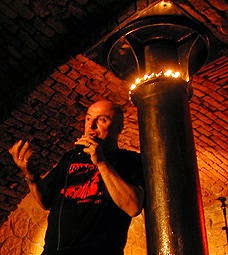