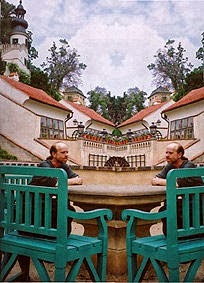 G.S. Evans has read a sampling of the stories that have been published in The Cafe Irreal, of which he is a coeditor. The Cafe Irreal is an internet journal that has been online since June 1998. Presenting Kafkaesque fiction, it was born in and inspired by Prague and has attempted to provide a venue for irreal literature.

It has featured a variety of established authors who have written in this style, including Istvan Orkeny, Rafael Pérez Estrada, Anne Maria Shua, and Norman Lock, as well many less established writers. In addition, it has published numerous Czech authors in translation, including Jana Moracova, Marian Palla, and Ewald Murrer. Writer’s Digest named it one of the top five online markets in their June 2003 issue, and it is a member of the New York-based Council of Literary Magazines and Presses.

G.S. Evans is a writer and translator who has been dividing his time between The Czech Republic and the United States since 1993.