It was our pleasure to welcome readers from our Hungarian counterpart - the Bardroom Reading and Performance Series. Canadian poet, Heather Hermant, Hungarian poet, Kalman Farago and British poet, David Hill are three of Budapest's active poetry performers.
Kalman Farago: Hungarian poet Kalman Farago writes poetry in English and Hungarian. To date, his English poems have appeared in the fusion poetry anthology Short Fuse, edited by Todd Swift and Philip Norton, in the Bisdsuit annual anthology of the Norwich School of Art and Design, and in the Poemcards project of the British Council in Budapest. He has performed his poetry on stage at several Budapest venues including the Tea and Sympathy poetry cabaret at CD-FU, and the Budapest Bardroom series. He participates in the ongoing translation workshop run by the British Council, tranlating contemporary British (+Scottish, Irish and Welsh) poetry into Hungarian for the above-mentioned Poemcards. Farago is also a (non-playing) member of The Modern Theater, a local amateur theatre group, which recently staged its first production.

Heather Hermant: A graduate of the University of British Columbia in Biology, Heather Hermant is co-host of The Budapest Bardroom, Hungary's only English language poetry and performance series. Since her arrival in the region in 1997, she has appeared frequently in poetry events on stage at the Traf— Contemporary Arts House in Budapest, and at various festivals in Hungary. She is currently writing the text for the headlining dance theatre production of the Budapest Spring Festival, 2003, entitled 'Stigma', for The Shamans theatre. The text, which is being written together with well-known Hungarian poetess Orsolya Karafi‡th, is to be read by reknowned British actress Susannah York for the performance, and will be published in Budapest in April, 2003. Heather's poetry and fiction have also appeared in various Canadian literary journals, and most recently in "Short Fuse: A Global Anthology of New Fusion Poetry" (Rattapallax, New York). Heather was the recipient of an Emerging Artists' Grant from the Canada Council for the Arts in 2001, for her regional web-based audio project entitled "Game", hosted by Budapest's Centre for Culture and Communication [C3]. Heather teaches journalism and community building to high school students in Bosnia, when she is not in Budapest.

David Hill: David Hill welcomes writing commissions and performance invitations. His dramatic reading style has entertained audiences in places including New York, London and Budapest, where he co-hosts The Budapest Bardroom poetry readings. His accessible poems have been anthologized in the U.S., Britain, India and New Zealand (most notably by New York's Rattapallax Press), as well as appearing in his own two collections and in numerous magazines, such as Literary Review and Poetry News. His translations of German, Hungarian, Romanian and Russian poetry have been featured in publications including The Independent and used in international festivals. He also writes lyrics for recording artists.
Another reader that night was Gwendolyn Albert (below right) who's work was also featured in "Short Fuse: A Global Anthology of New Fusion Poetry" (Rattapallax, New York). Gwen is a Prague based poet and was a featured performer at Alchemy on March 3rd, 2003. 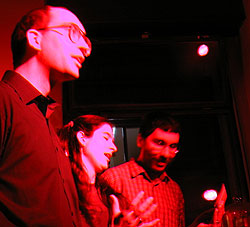 To our delight, the Bards of Budapest finished off with a piece composed especially for Alchemy - An Ode to Prague!